You’re wearing what?! National dress around the world

You’re wearing what?! National dress around the world

There’s just no accounting for taste is there? What you might think is a stunningly beautiful dress or outfit, someone else might think it’s the most hideous garment ever to be stitched together! The same can be said for national dress around the world! Some of these examples are for practical reasons, others for peacocking, pomp and circumstance. Many have long, historic traditions, while some are just hilariously outrageous. Sometimes it can be a combination of everything! Whatever your taste though, we’re sure you’ll enjoy having a look at some of these amazing national dress traditions from around the world and find some of these insider tips useful.

This relatively simple garment is worn all across SE Asia, but is predominately known as an Indian national dress. It consists of a single piece of fabric that is wrapped around the waist and then draped across the shoulder – however it can be worn multiple ways and is a very versatile item of clothing. You will find it everywhere you go in India, and it contributes immensely to this vibrant and colourful culture, with the many vivid and bright designs the sari can offer.

According to legend, it was created as a single garment because it was believed that a needle would contaminate the material.

The kimono can be worn by a Japanese man or a woman, although they differ in style, with the men’s version tending to be simpler. It is regarded as a very polite or formal item of clothing, and is generally worn on special occasions.

The word “kimono” was the Japanese for clothing, but today it refers to a specific type of garment. It consists of a long robe with very wide sleeves, which ties across your body with a sash. Typically made of a fine fabric such as silk, the kimono has become popular outside of Japan as a bath gown or house coat.

Much like the sari in India, the sarong is a simple garment that is known and used throughout all of SE Asia, but perhaps best known hailing from Indonesia. It is a large tube of fabric, wrapped around the waist, predominantly worn by men.

It too has a colourful impact on this part of the world, as the garment can come in a variety of designs, often adorned with animal and plant motifs. Anyone who has ever traveled in SE Asia will probably be in possession of one, or at least experienced the thousands on sale in the many markets and bazaars!

Shoes that are entirely made out of wood have been around for centuries all over the world, but perhaps the best known (and oldest) is the humble clog, hailing from the Netherlands. Perhaps not the most comfortable choice of footwear, clogs are still used by farmers and laborers as they offer decent protection for the feet!

They’re also used in traditional dance performances, as they can create an incredible (and loud!) sound when striking off the floor. The colourful designs and art work painted on this iconic footwear make clogs a great souvenir too.

(Pronounced Traheh De Looses) the “suit of lights” is an iconic national dress traditionally associated with Spanish bullfighters. So called because of the incredible intricacies of sequins and reflective gold and silver threads, the suit is a symbol of showmen, based upon 18th century fashions. The garment is incredibly complex, with a large number of parts making up the finished fashion, each with its own specific name and history.

If they ever do decide to abandon the controversial “sport” of bullfighting, we hope they never stop wearing this stunningly beautiful national dress.

Worn by the men of Celtic ancestry, the kilt is more traditionally known as the Scottish national dress. It’s arguably one of the most iconic garments on our list, as everyone knows where it’s from without thinking! Practical as well as fashionable, the kilt keeps you warm in winter and cool in summer – which is possibly why it was developed in the first place.

The colours on the kilt are known as the tartan, and each tartan represents a family or “clan.” Traditionally you were only allowed to wear one that corresponded to your family, but today it’s more relaxed as even Englishman can hire them for weddings and special occasions!

Equally as iconic as the kilt is the German lederhosen – which plays a vital role in the popular Oktoberfest celebration every autumn in the country. Consisting of breeches made of leather which are short or knee length, there were traditionally worn as work clothes and predominantly used in alpine regions.

Every year, thousands of people descend into Bavaria to enjoy the German harvest – which usually constitutes drinking a lot of beer. Even if you’re not from Germany, you’re likely to be wearing the lederhosen as part of the festivities!

The kosovorotka is a traditional Russian shirt with long sleeves and reaching past the waist. It has buttons at the collar that are off centre, but is worn by being pulled over the head and tied round the midriff. More commonly worn by Russian peasants, the garment became a symbol of Russian folk, music and dance traditions, and it makes a popular souvenir if visiting the country today. 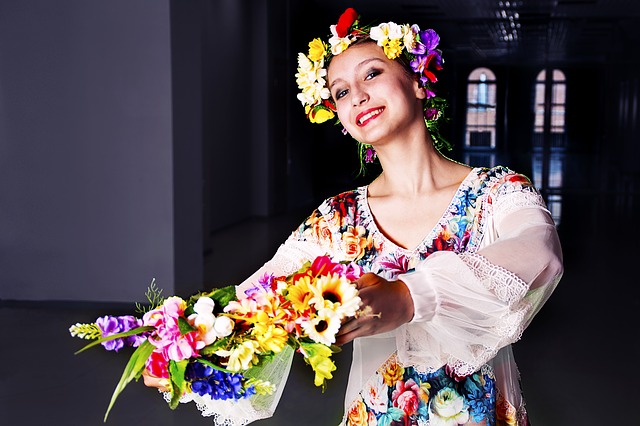 It first appeared in the country around the 12th century, and interestingly, the off-centre collar was developed to prevents ones crucifix from slipping out during work. Fascinating!

Nobody is really sure where the famous poncho hails from, so we’re hedging our bets and saying all of South America! This traditional garment is usually made of silk or wool, with a hole for the head and then covering the whole torso. It has military origins too, used by the US army heavily in the 1850’s, and Native Americans can also lay claim to its significant use.

An incredibly practical and versatile garment, WW2 German soldiers would also use them as tents, and Clint Eastwood really put them on the map in his movies. Today you’re more likely to see thousands of tourists wearing waterproof versions in Thailand!

Traditionally worn across the Arab Gulf, the dishdasha is known by a variety of different names – including the thawb – depending on where you’re from. It is an ankle length garment with long sleeves, usually available in white and is extremely comfortable and loose fitting. The colour and cut of the garment make it the perfect fashion of choice to wear in these unbearably hot countries, as unlike the west, they’re not really allowed to take clothes off when the sun shines! Normally made of cotton, it can be woven of sheep’s wool in a colder climate.

Beholding national dress around the world is one of the joys of traveling, especially if you catch a particular festival or event where everyone is wearing something spectacular. We’ve only just scratched the surface here, as the world’s fashion is fascinatingly diverse and multicultural, with an equally fascinating history behind it. Wherever you go, you’re sure to find the local population wearing something really unique and interesting – and you may want to ditch your own clothes and try it for yourself!

So over to you! Which of these national dresses have you tried, or you would really like to try?

Hey Welcome to our blog, We have been traveling together for a few years now, and here we post our recommendations and thoughts on our Romantic destinations, Hope you love the site